Inside the life of Mistress Harley, the one-and-only Techdomme

It’s a mild but muggy September day in Beverly Hills, California, when Harley and I meet at her new neighborhood nail salon. Today, the 6-foot-tall Silicon Valley expatriate is dressed in a leatherlike jumpsuit so short and low-cut that it feels like a mere suggestion of clothing. A shock of magenta hair frames the constellation of stars tattooed across her left temple. Her unnaturally plump lips are so glossy and brightly colored they almost look lacquered. She wears platform boots to accentuate her already-imposing frame. An assortment of colorful, outsize tattoos runs the length of her seemingly infinite limbs.

With her now-pink claws freshly coated, she looks nothing like the woman who appeared on The Doctors early that morning. During a taping of the Oprah-approved daytime talk show, in which she was accused of taking advantage of the poor and mentally unstable, she wore a flowy, high collared pirate’s top, reminiscent of Seinfeld’s iconic “puffy shirt.” Her face tats have been covered in stage makeup, but her signature glossy lips and flaming-red hair are a beacon of eccentricity in a sea of uniformity.

The segment begins with one of those nauseating quick-cut videos expertly exaggerating every aspect of Harley’s work in an attempt to alert the audience that something sinister is just around the corner. Then it’s time to go in for the kill. The panel of four health-care professionals will spend the better part of 10 minutes hurling accusations, pointed questions and mock compliments Harley’s way. For the majority of the segment, she’ll sit, surrounded by a studio audience that looks plucked from a J.C. Penney catalog, nodding her head with a defiant smirk. On the occasion that they let her speak, Harley will defend her work unemotionally — a stark contrast to the dramatics of The Doctors’ firing squad.

“I worked in an office with a kegerator, and I still had to be there fucking 15 hours a day sometimes,” she said. “I still got paid less than I was worth, and I know that because now I’m getting paid exactly what I’m worth.”

Harley spends her nights out at the bar or watching amateur wrestling matches. She spends her days lounging on the couch with her husband, watching Netflix. She has her groceries delivered from the grocery store around the corner. Her husband, who often matches his clothing with his own shock of bright pink hair, serves as her personal chef, bag handler and constant companion. On occasion her clients will splurge on a trip for the couple — a point that had The Doctors frothing at the mouth.

This is the colorful, comfortable, even enviable life of a woman who claims to make obscene amounts of money without ever having to do anything. It’s no wonder, then, that even in a post-50 Shades of Grey world Harley is a polarizing figure. This outsize personality who defies convention at just about every corner is exploiting her sexuality in what could be the ultimate lifehack.

She’s written a veritable library of self-published e-books with titles like The Consensual Blackmail Manual, the Holy Harley Bible and Scam Book for Guys Who Like to Lose, which contains 22 pages of, well, nothing. Her catalog of more than 700 custom clips, which sell for $10 per minute, includes titles like “Cameltoe Panties Pussy Worship” and “Christmas Pervert.” She sells one-on-one Skype sessions for the same price. She even has her own Android app, which she can use to track her clients’ whereabouts and read and respond to their text messages at a cost of $100. She offers “feminization and sissy training” for up to $300 a session and in-person domination for up to $3,000.

For many of her customers, though, the real thrill comes from blackmail. Harley can demand anywhere from $50 to $10,000 by threatening to expose her submissives’ secrets. She maintains a “Loser Hall of Shame” for “Exposed Sissies and Faggots” who send her unsolicited nudes or fail to deliver on scheduled payments. For those who don’t have time for all the back and forth, subs can pay $50 to be featured on the page and another $100 to be removed.

Her most loyal customers sign legally binding debt contracts, agreeing to pay her a set amount over time — usually in the tens of thousands of dollars. At least one man has even given her full control of his web cameras and intercom systems, which she uses to rouse him from sleep for impromptu worship sessions by blasting Wagner throughout his house.

The day before her TV premiere, she offered me a complimentary desktop takeover — one of her most popular services — to show just how easily she can ruin the life of a defiant client. The process starts by installing TeamViewer, a basic enterprise program that allows IT professionals to access a user’s desktop and troubleshoot issues remotely. From there she resets permissions to make herself the administrator and turns on parental controls that make pornography — save for her site — off-limits. She’ll install keyloggers to keep track of your every move and ransomware that will lock you out of your computer if you fail to pay her at agreed-upon intervals.

I gave Harley access to a relatively new work machine and let her get to the business of ruining my life. Unfortunately for her, I’m basically shameless. While she wasn’t able to pull up anything incriminating in my Google searches or on my hard drive, she quickly gained entry to my work email and located my most sensitive professional contacts. Had she, for example, come across a stash of porn or a secret folder of dick pics, she very easily could have forwarded them to my boss. She also very quickly uncovered all of the passwords I’d saved in Chrome — an embarrassingly large number — and pointed out that she could easily access my PayPal account and wreak havoc on my personal expenses.

I didn’t find anything thrilling or arousing about watching Harley’s phantom cursor scroll across my screen. That said, I am, as Harley so kindly pointed out, “a hard man to blackmail,” largely because I have so little to hide. That, and, despite having foolishly saved a couple of sensitive passwords to Chrome, the computer I was using was largely a blank slate. 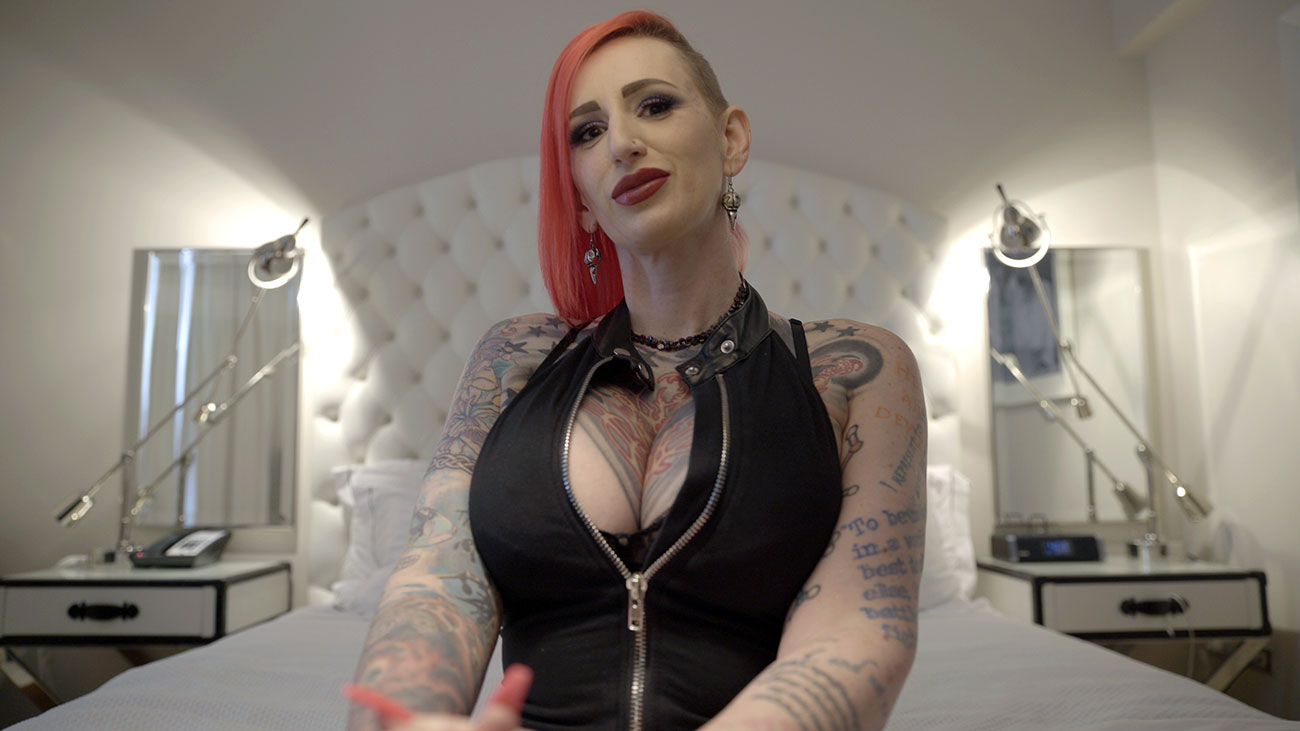 “I worked in an office with a kegerator, and I still had to be there fucking 15 hours a day sometimes. I still got paid less than I was worth, and I know that because now I’m getting paid exactly what I’m worth.” — Mistress Harley

“What I’m most interested in is being under someone’s control, being under someone’s direction, and money in our society is very important in regards to what you can achieve really,” Michael said. “It’s unfortunately that way, but that’s the way it is. It is the ultimate form of control to me. It’s just, a phenomenal all-encompassing way to give up yourself to someone else.”

Despite what The Doctors and other detractors might say, Michael says there’s nothing harmful about financial domination. He lives a modest lifestyle and his relationship with Harley is far from a negative influence. It allows him to be who he truly is as a person and a sexual being. It’s hard to argue with the exchange of money between two seemingly healthy, well-adjusted adults, but Harley’s relationships aren’t all that morally and ethically black-and-white.

Two years ago Harley entered into a dom-sub relationship with a German IT worker with feminization fantasies. They went through the standard desktop takeover and she installed her custom Android app on his phone. Their relationship grew quickly and Harley regularly had him dressing in a female drag, but he wanted to take his desires even further.

He wanted to be castrated.

He said he’d been dreaming about it for 20 years and had found a doctor in Guadalajara who would do the surgery. After some contemplation and a head-check with her psychologist, Harley agreed to help as tough-love moral support. She says she researched the health risks involved and the doctor he selected. She helped him with a budget for travel, surgery and recovery and she stayed in touch with him immediately before and after he went under the knife. The surgery was successful. Harley’s sub had his testicles removed and replaced with unnaturally large silicone implants.

“I’m invested in knowing that my subs are happy and that we’re in a symbiotic, reciprocal relationship.”

Harley says she treated the request like any other. “The person this person wants to be is a person that does not have any balls,” she said matter-of-factly. When I pointed out that it seemed like a greater emotional investment than her day-to-day desktop takeovers and sissy-shaming, she betrayed her blasé attitude.

If you can believe Harley, her line of work is first and foremost about making money — lots of money. It’s about power and sexual desire divorced from reason and morality, and she doesn’t care what you think about it. In fact, depending on how you look at it, pushing a client into castration may not actually be the most disturbing request Harley has granted. She occasionally engages in roleplay scenarios that involve degrading subs based on their race, religion and attraction to the same sex, and laughs off critiques that what she is doing is harmful. Harley would have you believe she’s amoral and unapologetic, but, she says, she does have limits.

“Crime is a hard limit for me,” she said. “I’m also not into scat. So, like, if a guy wants to poop on himself, he can do that for someone else. Otherwise, it’s just mostly things that are illegal. If I feel like someone is mentally ill or unbalanced in anyway, I will not continue with that person because I feel like that’s unsafe for me.”

She says child pornography is an obvious dealbreaker. If she were to find it on a client’s computer, she says, she’d end the relationship and report them, but not all scenarios are so universally immoral. Harley cites a particularly odd request from a client whom she eventually cut off.

She said at first she thought it was just weird, but the request was always the same and she eventually ended the relationship because it “felt gross.”

Castration, race play, simulated incest. Yes, it’s consensual. Yes, it’s roleplay. And, yes, it’s a job, but when you look at the scope of her work, it’s easy to see why people find the Techdomme so threatening. For all of her colorful personality and over-the-top appearance, Harley operates in a moral, ethical gray area.

Throughout my time with Harley, I found myself constantly checking my own prejudices. I consider myself an open-minded person when it comes to the very personal sex acts that happen between consensual adults, but I couldn’t quite reconcile some of Harley’s more controversial practices. I may never understand what would compel her to coach a client into castration or to use the word “faggot” so liberally, but Harley doesn’t care what I think. She doesn’t care about you or The Doctors. In fact, what you think of Harley may say more about you then it does about her.

Harley stands behind her work, unashamed and undeterred by the repercussions. When I asked her if her family knew what she did for a living, she said she’d told her mother and assumes everyone will eventually figure it out. In any case, she’s not apologizing.

“I’m pretty distinctive-looking, and so it’s not like you can mistake me for someone else,” she said. “And I don’t care. Ultimately, I’m living the life I want to live and anyone who has a problem with that can go fuck themselves.”

This article first appeared at Engadget.com 1/2/18.