Semen, centrifuges and a personal journey in male fertility

Or how I spent my Tuesday morning.

In August 2012, I came into a neon-pink shot glass. Nine months later, a baby was born.

I’d never planned on having a child of my own — and to be clear, I still don’t — but when two of my best friends started looking for a donor, I jumped on the opportunity. For those of us who can’t have children with our partners through good old-fashioned sex, the path to pregnancy is complicated and expensive. After careful consideration, my friends decided on what’s commonly referred to as the Turkey Baster Method. I would masturbate into a sterile collection cup and pass the resulting semen to my friend who would draw it into a syringe and deliver it to his wife. She would then plunge it into her vagina.

Because they lived in Texas and I lived in California and turkey basting isn’t quite as foolproof as straight-up penis-in-vagina insemination, a lot of research and careful timing went into preparing for the moment that I found myself jacking off in their guest bedroom. We knew she was fertile as a result of a comprehensive physical, but it wasn’t until after our second attempt that we considered that I might be shooting blanks. My spunk was ultimately fruitful, but for a while, we had our doubts.

My spunk was ultimately fruitful, but for a while, we had our doubts.

So, I set off to have my semen analyzed. There were piles of paperwork, bunk referrals and uncomfortable conversations with closed-minded doctors. I’d spent days driving all over the Bay Area before ending up with my pants around my ankles in a UCSF collection room. Ultimately, my sperm was healthy and in great supply, but it was the most complicated, time-consuming orgasm I’d ever had.

“Trak allows guys to collect their sample and get a measure of sperm count in the comfort of their own home,” Sommer said. “Today’s alternative is really going to a fertility clinic or urology office for a clinical semen analysis, and for a lot of reasons, embarrassment and privacy — and lack of understanding — men simply aren’t going in. At least, not early on as a couple tries to conceive.” 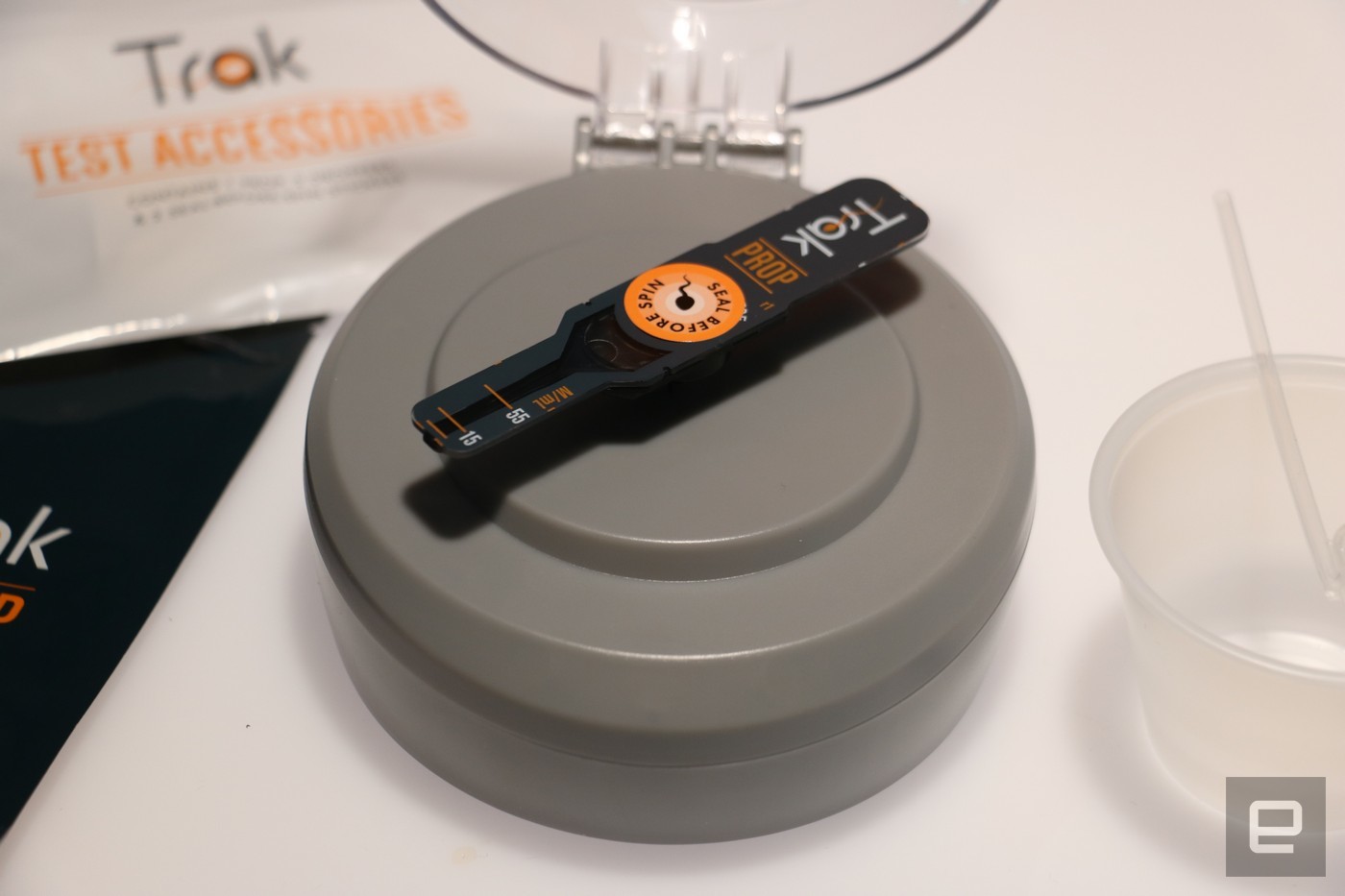 Sandstone’s solution is a small, hockey-puck-shape, double-A-powered centrifuge that whirls a small amount of semen around on a small propeller. The force created from that rapid rotation separates the seminal fluid from sperm and offers an FDA-approved reading of a man’s sperm count in just 45 minutes. Unlike a traditional lab test, Trak can’t measure sperm motility (movement) or morphology (shape), and it’s not the only device of its kind on the market, either. You can pick up over-the-counter kits like Sperm Check for around $30 at most pharmacies, but these tests only provide a positive or negative result while Trak can tell you where you fall on a fertility spectrum.

Sommer says the real advantage isn’t just in saving men embarrassment, time and money, but in what Trak does with the information it provides. Using the app, men can enter information about their health and lifestyle, receive tips on how to increase their sperm count and track fluctuations over time.

It’s a seemingly low-tech device but, as Stanford University urologist and Sandstone consultant Michael Eisenberg told me, Trak is a potential game-changer for diagnosing infertility in men because, you know, masculinity is so fragile.

“If you look at good data on infertility, about half the time, it’s men; half the time, it’s a woman. But usually in this country, women seek care first,” Eisenberg said. “I think that is because usually, they’re having a, a gynecologist they’re used to going to, and they have a relationship and so … that conversation sort of begins there. I think also, there’s just a historic lack of knowledge, I guess, about the whole process. And a lot of people think fertility tends to be a female problem.”

We ordered takeout while the enzymes turned my semen from a thick, sticky substance into a runny, cloudy sperm soup.

Anyway, the proof is in the pudding, or in this case, the semen, so I gave Trak a spin. I’d already been through the needlessly complicated process of having my sperm analyzed in a lab. If Trak could simplify that process for other men and at the same time teach them something about what’s hanging between their legs, I thought, it might actually justify that $200 price tag.

According to Eisenberg, sperm concentration is highest when a man refrains from ejaculating for two to five days. I rarely go more than 24 hours without an orgasm, so I was near ready to explode by the time 48 hours had passed. I pulled out the collection cup — the same sort used for takeout at fast-food restaurants — and read through the straightforward step-by-step guide to collection and analysis. Just as the nurses had done before my sperm analysis the manual recommended that I refrain from using lube or condoms during collection (why you’d do the latter is beyond me, but hey, different strokes for different folks) as they can kill healthy sperm.

At home, I had my own expectant audience. Our camera crew was waiting outside to film the results, but just being able to masturbate in a place that I’d done it so many times before put me at ease. I fired up my favorite Tumblr and within five minutes, I’d unloaded a sufficient-enough sample for the test and swirled the sample around to combine it with enzymes in the bottom of the collection cup. From there, it was just a matter of waiting. We ordered takeout while the enzymes turned my semen from a thick, sticky substance into a runny, cloudy sperm soup. After the recommended 45-minute resting period, it was time to set the centrifuge into action.

I dropped the suggested amount into the small opening in the middle of the propeller, covered the hole with the provided sticker, snapped the propeller into place, shut the lid and turned the thing on. Within a few minutes, a flashing light indicated my sperm count was ready. I popped open the lid to find the simple white line created by my sperm cells indicating that I had optimal sperm count. Lucky for me and my bio-baby’s mama, I had more than 55 million sperm per milliliter of semen — ideal for baby-making. Men who fall between 15 and 55 million sperm per milliliter may have a harder time getting their partners pregnant; those falling below 15 million have an even lower chance and are encouraged to seek medical help. If my count had fallen below 55 million, I could have used the Trak app to identify ways to improve my count.

The app is heavy on data collection. Since it doesn’t connect directly to Trak’s hardware, you’ll be prompted to enter the results of your tests and the results of any other sperm analysis lab work you’ve had done, as well as answer a series of questions about your medical history and lifestyle. In order to make the most of Trak, you’ll need a pretty extensive overview of your health including cholesterol levels, blood pressure, blood sugar and hormones. I didn’t have any of these readings readily available and would have had to see my doctor to obtain them. It’s counterintuitive for an at-home diagnosis kit, but fits in with Sandstone’s ambitions. Sommer says, perhaps unsurprisingly, that the data it collects from the Trak app will factor into future generations of the device and the company’s broader strategy.

I entered as much information I had at hand, including my height, weight, waist size, eating, drinking and exercise habits and how often I expose my testicles to certain types of heat: saunas, baths, hot tubs, etc. I was then given a score on a scale of 1 to 100, rating my health, which, despite my optimal sperm count came in at 66 due in large part to the fact that I drink, smoke and toke daily. If I were looking to increase my sperm count, I’d be able to update these stats in addition to new test results to see how changes in my lifestyle might affect my count over time.

Ultimately, using Trak in the privacy of my home was a far easier process than what I’d experienced in the traditional medical environment. But its success hinges on a lot more than convenience.

At $200, it could prove inaccessible for many of the people it could help. It’s also the sexual equivalent of an apple corer or melon baller — a convenient but limited single-use device. After all, sperm count is only a fraction of the greater picture for male infertility. It may be a “headline parameter,” as Sommer put it, but it’s far from the sole factor in successful insemination. Trak is also facing an uphill battle when it comes to how we look at fertility as a society. It will have to overcome the deep-rooted sexual discrimination that has led so many couples to think of infertility as solely a female problem. Trak is a small step toward the futuristic DIY diagnostics symbolized by Star Trek’s Tricorder, but Sandstone is going to need to look beyond semen if it plans to revolutionize consumer health care.

‘Your Hands Are Feet’ puts you inside a psychedelic egg yolk