Sex at CES: An uncomfortable coupling

CES gave birth to porn's biggest show, then it turned its back.

Tech veterans recalled days spent rubbing elbows with adult-film stars and nights stuffing dollar bills into G-strings. But from where I was standing, in a sea of brightly lit displays and airborne illness, there was nothing sexy about the world’s biggest technology showcase.

“None of these people had ever seen an adult film. Because before home video you could not see adult movies, except if you went to a theater or you had Super 8 films or went to an adult bookstore,” Fishbein says. “So all of these new customers were looking for adult films. And they were asking us, ‘Can you recommend an adult movie? We just got our new VCR.'”

Soon after publishing the first issue, Fishbein started receiving subscription requests from neighborhood video stores across the United States. AVN proved more popular with retailers than consumers, so Fishbein took his small consumer newsletter, packed with interviews of stars and directors, and refocused it as a trade publication, a sort of X-rated Variety.

While hardware manufacturers were given prime real estate on the Las Vegas Convention Center floor, Fishbein says, adult-video companies were tucked away in the back of the Sahara hotel, roped off from the rest of the conference.

“Literally, you had to leave the convention center and find your way to the Sahara if you wanted to see the adult people,” Fishbein said. “The adult people always felt like second-class citizens because they were paying top dollar for the exhibit space but they weren’t sure they were getting all the traffic.”

After years of being on the outskirts of CES, AVN’s customers started pushing for a stand-alone tradeshow. In 1998 AVN broke away, taking porn’s biggest players with it.

“It made us feel kinda good, like, look you screwed us a little too much,” Jeremy said. “Now you can kindly go fuck yourself.”

At its peak, AEE was a wall-to-wall circus of mulleted muscle hunks, bleach-blondes with beachball boobs and slack-jawed onlookers. Women teetering on razor-thin stilettos sprawled across card tables, perched atop bar stools and swung around free-standing stripper poles, occasionally stopping to pose for a picture or sign an autograph. 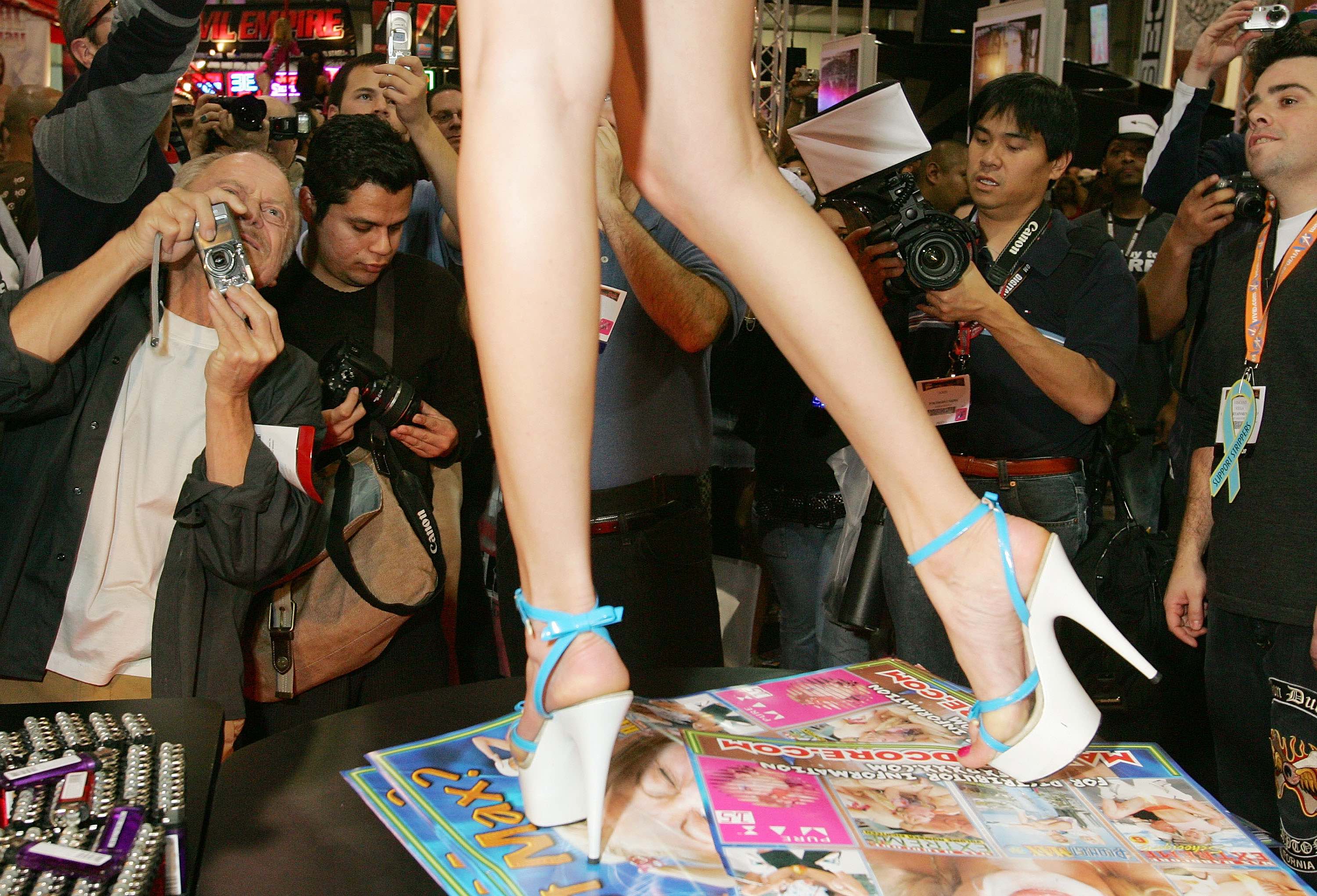 Penthouse CEO Kelly Holland, then a documentary filmmaker, recalls interviewing Nina Hartley, famous for her voluptuous posterior, while she was bent over a table at AEE. A line of eager CES attendees trailed behind her, waiting to cheese it up with her butt.

“It was a real watershed moment because it was a confluence of bad things all happening at once, Fishbein says. “It was a shit storm.”

“It was a ghost town for AVN for the first two or three years,” Holland says. “It was a horrible, tragic, pathetic show. I always felt sorry for the vendors that were there — we weren’t exhibiting at the time — because they were just standing in these booths and there was no one there. Everything looked forlorn and desolate.”The show has since reestablished itself as a sort of Comic-Con for porn, but the absence is glaring. AVN needed CES to drive attendance (we reached out for exact numbers but did not receive an answer in time for publication). CES, on the other hand, saw record turnout in its first year going solo, but there was clearly something missing.

From the time that Fishbein established AEE as its own show, the Consumer Electronics Association had taken a hard stance against adult exhibitors. With the shows no longer occupying the same week, there’s practically zero visibility for the sex industry at CES.

The days of taking lunch breaks with James Deen and Jenna Jameson were done, but there were still plenty of sexual outlets for the suits at CES. About an hour outside of Las Vegas, in a small town called Parhump, Nevada, a handful of brothels line a dirt road. Sheri’s Ranch sits near the end of that road, just past the world famous Chicken Ranch, “where the West is still wild.” Inside, as many as 25 “legal courtesans” entertain guests in themed rooms and bungalows year-round. This is the “unofficial brothel of CES.”

Sheri’s Ranch earned that title presumably because of the upswing in business the brothel experiences every year during CES. Dena, the ranch’s madame, says conference attendees have frequented this and other brothels during lunch breaks or after the show floor closes since she can remember, but after AVN and CES split, there was a significant surge in business.

Dena says the ranch takes on a “bachelor-party feel” during CES, with clients ready to escape the buttoned-up confines of the convention. The show’s official stance prohibiting adult companies has created a censorious oasis in the middle of Sin City, but sex has been making a quiet comeback at CES, starting with a family-run sex-toy company from small-town New Hampshire.

“I think it was great,” Brian Dunham says. “They said, ‘Let’s give it a try, and if it works, great. If it doesn’t work and we get a lot of blowback, then you know, you probably won’t be invited back.'”

The CEA let OhMiBod in under the same conditions as other exhibitors, prohibiting the “showing of film, photos, games or other software in the exhibit area which are deemed objectionable, including explicit or simulated sex, nudity or violence.”

According to Suki, OhMiBod was “tucked back in a corner” between Taser International and Yahoo, and didn’t feel completely welcome.

“We did, I think, get kind of checked on,” Suki Dunham says. “And I find it funny because, of course, many of the tech companies hire talent for their booth, and they hire certain talent to get people interested in what they have to show, even if it’s, whatever it is, new tech in automotive. There’s talent there, meaning women that are very good-looking and all, you know, dressed up or sexy or whatever. We would never do that in our booth, because that would be counterproductive for us, because we’re trying to push the ball forward, and, to me, that makes us regress.”

Sex was present at CES, but it wasn’t the same tits-out, dick-swinging sideshow that AEE once provided. Sex at CES was a decidedly more sterile affair, unless of course, it came in the way of booth babes selling also-ran HDTVs. The Dunhams say reactions continue to be a mix of juvenile giggles, knowing nods and genuine interest.

“We still get, every year, the comment, ‘Aren’t you at the wrong show?'” Suki Dunham says. “Meaning that we’re not at AVN. People feel uncomfortable about sex. It’s really funny, but some men still act like 10-year-old boys when it comes to sex.”

Despite the sideways glances and juvenile commentary, CES is a big moneymaker for OhMiBod. In its five years at the show, the company has secured big distribution deals with retailers like Target and Brookstone, mainstream press coverage from publications like Wired and last year’s Best of CES Awards win for “Best Digital Health and Fitness Product.” It might seem that CES has warmed to sex as a legitimate moneymaker, but the recent addition of adult-film studio Naughty America comes with a caveat that shows how little has changed since Fishbein first attended in 1984.

In an official statement, a CTA spokesperson said: “When making decisions on any CES exhibitor, the Consumer Technology Association first determines if the exhibit/product fits into one of our stated product categories. In the case of Naughty America, we determined that the product truly fit under Virtual Reality, and helps demonstrate the range of content and usage for this groundbreaking technology. As a rule, adult content/products are not allowed on the CES show floor and do not fit into a defined product category. At CES 2017, Naughty America will be in a private meeting room, not featured on the show floor.”

“The whole dialogue around sex is always so uncomfortable, so no one is ever going to proclaim how they respect the adult industry or how valuable it is to driving their technologies forward,” Holland says. “Did someone from Google come to talk to me about VR? Yes. Did they make me swear on a Bible that I would not talk about it and identify them? Yes. Was Panasonic uncomfortable when their CTO was there about his involvement with me? Yes. But did he fly over from Japan to sit on a set with me? Yes. So people are pragmatists, you know? They’re not gonna upset their boards, they’re not going to shake up their consumer base.”